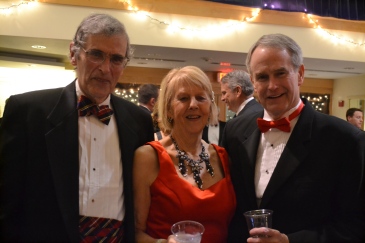 By Sally Davenport
Unlike most oboists, I didn’t take up the oboe until I was about 30, after we had our first child and moved to Hingham.  What terrific luck that there was a community music school, the South Shore Conservatory of Music (as it was called in those days) right here in Hingham!  I usually say my husband John made me take it up, but in truth, we both loved the sound of the oboe, and we both wanted me to learn an instrument so we could play together.  He’s a pretty good pianist!

Neither of us realized that the oboe is considered a hard instrument to learn. My first teacher suggested I try another woodwind instrument, and I’m pretty sure she thought I was WAY too old to learn oboe.  But I wanted to try, so I rented a student instrument and got started.

Like lots of mothers-to-be, I thought that after quitting full time work I would have time on my hands to start this new endeavor while taking care of a newborn – ha, ha!  Still, I managed to practice while our daughter Grace napped for 15 or 20 minutes a day, and, as is usually true with enthusiastic beginners, I started making progress—going from terrible, to not so terrible, to okay and then, maybe—pretty good.

After our second baby, I continued to practice while Grace, who was then two and a half, went to South Shore Conservatory’s delightful arts-integrated preschool, and newborn Luke napped. I also kept taking lessons (a KEY component of progressing) at SSC.

During this period of raising our children and settling into Hingham, our entire family was active at SSC.  Our son Luke also went to the SSC preschool; Grace took Saturday acting classes and Suzuki viola lessons; and John took piano lessons, joined the Board of Trustees and later became President of the Board.  Over time, Luke took piano and clarinet lessons and I auditioned and attended Summer Wind Ensemble, which, in those days was a five-week summer program.  I admit I was a little old to do it, but figured I was musically at the stage a junior in high school would be.  My, that was hard work, but fun… especially trying to fit in with a bunch of enjoyable and interesting teenagers.

Since SWE those many years ago, I earned a diploma in oboe performance from the Longy School in Cambridge, and started teaching at SSC.  Over the years I’ve also played with the Quincy Symphony, the Plymouth Philharmonic, the former Hingham Civic Orchestra, the Broad Cove Chorale and the Unicorn Singers (with whom I also sing), Quincy Choral Society, and at Company Theatre and Linden Ponds.  I have also participated in a number of other exciting freelance ventures.  So, it’s been, and still is, a fun ride.

And yes, John and I do still play together, quite a lot actually.  That’s the most fun thing!  After 27 years of teaching, this fall I “retired” from SSC, but still feel very much part of the community. I still volunteer my time, serve as an overseer, and perform with John in “grownup” recitals.  It’s a great place.  You should check it out.

South Shore Conservatory thanks Sally Davenport for her 27 years of service, and looks forward to seeing her at future SSC events and concerts.