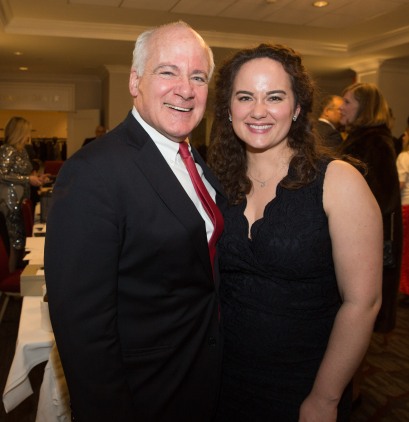 By Elaine Sorrentino
How fitting is it that South Shore Conservatory’s Board of Trustees chose November, the month of giving thanks, to pay tribute to Michael Puzo, and thank him as he steps down from SSC’s Board, taking on a new role of Trustee Emeritus, after 30 years of dedication and unwavering commitment to the Conservatory’s work in making music, changing lives, and building community through the arts?

In the resolution the Board presented at SSC’s Annual Meeting on November 12, they stated “There simply are not enough resolutions the Board could adopt to begin to capture all that Mike and his family have given to SSC, with their hearts, their time, their wallets and their professional and musical talents.  Let it suffice then to say this:  SSC would not be where it is today without his expertise in almost every field of this organization’s endeavor.”

It was very telling that during his tenure with SSC, Mike served twice as Board Chair, and was asked both times to serve extended terms, due to his deep involvement in and his critical importance to matters at hand at the time.  One such matter was the building of SSC’s Ellison Center for the Arts in Duxbury, a project he led tirelessly for over four years.  With his expert guidance, the Board and the community overcame many obstacles laid before them, and raised funds needed to build the Ellison Center, which opened its doors in 1996, providing a permanent and beautiful home for SSC in Duxbury.

South Shore Conservatory has benefited financially, legally and musically, from Mike’s close involvement, counsel, and support of each fundraising initiative we have launched over the years, including the Encore Society, from his hospitality and generous spirit in co-hosting Chase Away the Winter Blues galas, hosting dinners, to engaging his law firm to sponsor Evening Under the Stars (EUS) receptions.  We know we are not alone; many non-profits, as well as the town of Hingham, have benefited from his legal expertise and wise counsel.

Our gratitude even extends to his deep sonorous voice, which will always be remembered when we recall his dazzling performance as a narrator at the EUS performance of Carmen in 2007, as well as his serenades at the Chase Away the Winter Blues piano bar.

In addition, the Board thanked Mike for the incredible amount of time he has given to SSC, his wise advice, and his attention to detail and the fiduciary duties of the Board; his willingness to take on any project, large or small; his thoughtful and probing questions.  They will miss his history lessons and the laughter he regularly brought into the board room with his sports analogies and idioms.

We are all very grateful to Michael Puzo for his vision and wisdom, the many relationships and communities he nurtured, and his deep loyalty and unwavering commitment to achieving excellence.  Without his counsel, South Shore Conservatory might look very different than it does today.   We thank him for all he has given our beloved community school for the arts, and wish him the best going forward.